The Robber's Grave in Montgomery or "the grave of the man

unjustly hanged" has long been a legend of note connected
with the town of Montgomery. 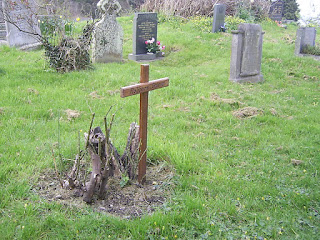 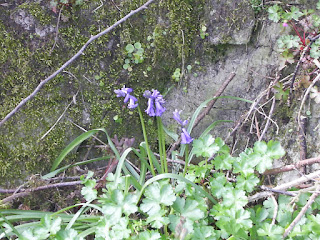 In 1821, John Davies a plasterer from Wrexham was accused by William Jones from Welshpool of assault and robbery.  Jones produced two witnesses (not to the robbery) and appealed to them to help him find his assailant and to finding his missing watch an money on Davies' person.  Davies was accordingly committed to the autumn sessions, where he pleaded "not guilty" but was found guilty by the jury.  At that time highway robbery was one of the many crimes punishable by death.  At the place of his execution, persons claimed to have heard John Davies declare his innocence and pray that God would not allow the grass to grow on his grave for a hundred years as a sign of his innocence.

He was buried in a portion of the churchyard where there had been no previous burials.


It is said that no sooner was the noose placed around Davies’s head that a great storm took place and above the noise of the rolling thunder he was heard to say,”If I am innocent, the grass, for one generation at least will not cover my grave”. As the trapdoor was about to open he cursed the two men who had set him up and called upon them to appear before God to account for their crimes.

It is also said that one died soon afterwards in a blasting accident and the other died from a wasting disease. As Davies had stated no grass grew on his grave for over 100 years and even to this day the grass is still patchy around his grave site.


Another story is told like this:
(information from: http://ludchurchmyblog.wordpress.com/places-further-afield/the-robbers-grave-2/)

..."The grave marks the spot of John Davies who moved into the area from Wrexham in 1821 where he had earnt a living as a Plasterer, he started working locally for a Widow known as Mrs Morris and her daughter Jane on their run down farm in the area. Thanks to John Davies’s hard work and dedication he managed to turn the farm around so that it was making a profit once more. This did not sit well with a local man named Thomas Pearce who had hoped to purchase the farm at a knock down price as it had been making a loss
To make matters worse Jane Morris had fallen for John Davies due in part to his hard work in turning the family’s fortunes around, the problem was that she was engaged to a local man named Robert Parker. This resulted in Parker and Pearce plotting to get rid of John Davies so they could both pursue their seperate agendas.  Parker and Pearce committed a violent robbery and left evidence at the scene of the crime that implicated Davies, this resulted in him being arrested and charged with the crime which carried the death penalty.
.
The grave lies about 24ft west of the path from the north gate of the churchyard to the church tower, and about 30ft from the late.

Justice will always be done. Get away with it now, but one day your sin will find you out.

Partofyourstory said...
This comment has been removed by a blog administrator.
30 July 2014 at 14:39

well can any one explain why he has not got a decent head stone yet if this story is to be believed then surly the town folks would of done at least that much in his justice...….

He robbed William Jones of a watch and money according to a newspaper report.